I think this is worth a post on my blog. Apparently a Windows Vista Sidebar gadget that I designed quite a while ago to follow a live Formula 1 news ticker has been good enough to serve as a template for German TV station RTL; a CLONING TEMPLATE!!!

RTL just put the same gadget on their own website. All they did was change a label move two buttons and change the gadget’s color from red to green. Nice job! I think you guys at RTL owe me some credit for that. You copied the overall gadget design and even the fly-out window. You didn’t even bother to change the settings dialog! This is a copy and paste job!!! I guess some intern then was asked to change a thing or two, right? A color, a label, even a button… I guess at least someone in the copy-cat company has heard Einstein’s wise words before: “Real creativity is knowing how to hide your sources” 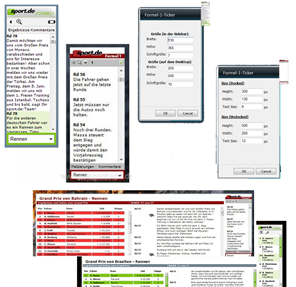 Can you tell the difference?

END_OF_DOCUMENT_TOKEN_TO_BE_REPLACED

Just uploaded a new version of the Formula-1-Ticker sidebar gadget. Now supports a setting dialog to control the size of the gadget. Also supports different sizes in docked and undocked mode. Text size is now adjustable, too. Give it a try!

Just wanted to point out two recent updates to my website.

A few days ago I finally uploaded a short description together with the slides and paper of a talk I gave a few weeks ago on the topic of “Rendering Smoke & Clouds” in the context of a game design university course. Have a look at it here.

The second update is a Windows Vista sidebar gadget, my first one actually. It displays the content of a (German) Formula 1 live text ticker (sport.rtl.de) in the Windows sidebar and includes features like a flyout window for detailed view, automatic refresh, quick access to the original website and a Formula 1 live stream. Feel free to give it a try here and please leave your feedback!

Most people reading this probably won’t find it very funny. I do though!

I can’t say whether I like it more for its being a joke about Hamilton (I’m a Ferrari fan) or the Spanish stubbornness of pronouncing foreign words the way they fit best into their own language regardless of how they should be pronounced or how absurd they might sound, which puts another joke in the banner below. Anyway, I just couldn’t help smiling when I first saw it. 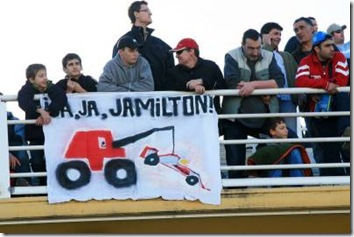 Jack is back! 24 to sweeten the waiting for Stargate Atlantis and Formula 1.

I had almost forgotten about the short preview of season 6 at the and of 24 season 5. Now while looking the web for the airing dates of the upcoming Stargate Atlantis season I came across the wikipedia page on 24. And hell … the pilot’s airing in 5 days!

So finally there’ll be an end to weird Spanish talk shows or never ending Operación Triunfo! If it’s only half as good as the earlier seasons, it’ll soon be a high priority entry on my weekly schedule! Allthough not all people I know do like 24, for me, it’s one of the best TV series I’ve ever seen.

And there’s even more! Seems that they are planning to make a 24 movie. Allhtough I’ve got no idea of how to make a 24 movie (unless it’s trying to challenge Michael Ende’s Never ending Story by lasting real 24 hours), the fact that it’ll be set in London sounds quite promising!

Anyway, 24 is not all! Two other fix items on my schedule are the second half of Stargate Atlantis season 3 starting on April 6th and of course the 2007 Formula 1 season opening on March 18th in Melbourne.

Any important TV shows I forgot to mention?