This article is a short tutorial on how install WebOS applications on your Palm Pre independent of the region they are intended for, e.g. install US only apps that do not even show up in the app catalog outside the US on your French / German / Spanish Palm Pre. The process is rather simple as it basically just exploits the current behavior of the App Catalog’s update mechanism.

But before I get to the point, let me comment something that really bothers me: As of now, the US App Catalog shows about 2000 apps, while the German catalog is showing a mere 600, paid apps included. I understand, that given Palm’s app submission forms, it’s a bit of an inconvenience for developers to fill out the extra fields to make an app available outside the US, but from my own apps QR deCODEr and DIX Dictionary, I managed to collect a bit of statistics (which I also confirmed with other developers), looking as shown below: 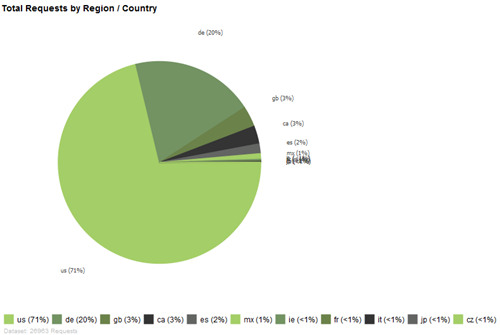 While the numbers for Canada, Mexico, Great Britain and Spain are admittedly not too impressive, things look quite different when it comes to Germany. The US account for about 70% of all WebOS users, but 20% of all users come from Germany as the diagram suggests. Thus, those developers not willing to take an extra five minutes to fill out the forms to make their app available outside the US are basically alienating between 20 and 30% of potential users of their app. What I find most frustrating about this is, that I can’t understand why so many developers don’t care about this. Sure, it’s a bit of a hassle to fill out those extra forms since translating your app takes quite some time and effort, but then again, Palm doesn’t force you to do so. You are free to just copy over your English app descriptions into the German / Spanish / French forms. That’s about two minutes for each additional language. So to all of those lazy developers: Are you sure you don’t have an extra six minutes?! There really is more to this world than the United States!

But enough already, here we got with the install tutorial for apps submitted for other regions than your own.

I realize that this may seem quite some work to most ordinary users, but for somebody who’s used homebrew apps or the WebOS SDK before, it doesn’t take more than 5 minutes to follow the tutorial and install an app.

The basic idea is to exploit the App Catalog update mechanism’s current behavior. If you click a link to an app that’s not available in your region, instead of viewing this app, the app catalog presents you with an error message that this app is not available in your country. Nevertheless, if you already have an older version of such an app installed and go to the update view in the App Catalog, you’ll find that even for those app only available in other regions, you get a notification of available updates and upon tapping ‘install’ the App Catalog will happily download and install the new version of such an app.ç

So all we need to do is make WebOS think that we have an old version of the app we want already installed on our device and it will allow us to download and install the latest version. We do so by creating a “dummy” app with the same app ID as the app we want and a lower version number than the currently available version.

UPDATE: As an alternative to the following DIY tutorial, there are two apps that do all the work for you. See the end of this post for details.

I’ve successfully tried this procedure with a dozen apps. It works only for FREE apps though. For paid apps, Palm is unfortunately / thankfully doing additional checks, so that you can’t just inject a dummy package to get a free update to the actual app

One last thing: Since I’ve already done this procedure for quite a few apps, you can download my dummy app packages below and just install them to your device using WebOS Quick Install. This way you can skip the text file editing and command line packaging / installing and directly head to the App Catalog update page to get these apps.

As Jason Robitaille points out here, his Ipk Packager tool may be more comfortable for creating dummy app packages than your regular text editor. Also, Blacklight was kind enough to update his Ipk Fetcher tool to completely automate the above method. Presented with a list of available apps, just select the one you want and hit ‘Generate IPK’ and it‘s done.