Few weeks ago I stumbled upon these posts here and here, mentioning Google SketchUp as a design tool for home improvement, etc. This reminded me of one of my own articles that’s been in the drafts pipeline for quite a while now and which I had almost forgotten about. So here we go, finally:

Almost two years ago when I was about to move in into a new apartment, I was on the look for some 3D home design tool. Now, there’s plenty of those tools on the market, developed by smaller software companies producing software off the assembly line, i.e. flooding the market with half-baked mass-productions at a ridiculous price point. So I didn’t really consider buying one of those things. Then again, professional CAD software at an even higher (though justified) price point as e.g. various products offered by Autodesk would have been a bit of an overkill for the task at hand, which is why I finally ended up using Google SketchUp.

Now Google SketchUp has a few things going for it:

On the other hand, up till then, I had only used SketchUp to design simple objects for Google Earth and never done anything more complex. So designing my new apartment in SketchUp working with true and precise scaling, I also realized quite a few shortcomings on an otherwise awesome product:

So what’s the verdict? Given it’s price and learning curve compared to other products on the market Google SketchUp is the way to go for most of the hobbyists out there, I’d say! Although the user interface could use some improvement and a bit more pro functionality would be nice to have, with a little bit of patience you can do almost anything with SketchUp, from building a whole city quarter for Google Earth to designing and planning the interior of your new apartment. See the results of my work for an example of the latter one: 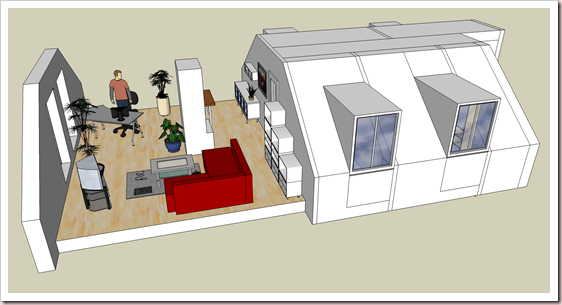