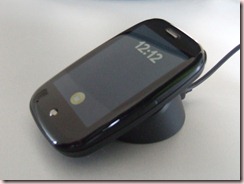 Short answer: Yes. In a few more words: It’s not an iPhone killer as many out there labeled it to be but it can easily keep up with it. I wasn’t quite sure which one to get, the iPhone or the Palm Prē, till the last moment but I finally decided to take the risk and give the Prē the benefit of the doubt. The Prē can’t keep up with the iPhone in every single aspect, there just are a few things where Palm just had no chance of overcoming the two year head start the iPhone has, the biggest aspect for sure being the App store. But the Prē more than compensates for this shortcomings by throwing in a number of creative ideas and features even the iPhone with all its apps has nothing to come up against with, like Synergy or MULTI TASKING. Ever tried to listen to web radio on the iPhone while downloading a large PDF in your browser and looking up a number of addresses just received via email in the Google Maps app, switching back and forth between the latter two?! Well, go ahead. Try! The bottom line is, the Prē doesn’t have everything the iPhone has but it surely doesn’t fall in the category of all those phones desperately trying to imitate the iPhone as closely as possible, failing miserably on the way there. It comes with its own set of unique and stylish features that allow things that aren’t even possible on the iPhone and over time, I’m sure, it will catch up further.  Besides, most of those things the Prē brings along right out of the box are quite polished and reliable making it a real pleasure to use.

I’ve been waiting to get a new phone for quite a while and while originally waiting for the iPhone 3GS release, I decided to wait a little longer when I learned that the Prē was on its way. Last Friday finally was the day, and it has been over week now that I own this shiny new toy. That’s plenty of time to explore every little detail of it and the reason I’d like to share a few of my thoughts, point out what I like about it and what not so much. There are a lot of things in which  i don’t agree with other reviews out there, but of course there are a few things that you may have read before, so here we go:

Popular Cons I do NOT agree with

In the end, the Palm Prē is a great phone in my opinion. In a few ways it’s two years behind the iPhone, in most things it can totally take it up to the iPhone and in some ways, it even beats the cr** out of the iPhone. As long as Palm doesn’t think they can take it slow now (in which case they would be sadly mistaken) and as long as they keep the updates coming and address current shortcomings and problems with the Prē, it has the potential (together with future WebOS phones) to be mentioned in the same breath as the iPhone and any Blackberry.

Oh, and as a last note: The reason I’m comparing it to the iPhone so much, although it’s not meant to be a so called “iPhone killer”, is because that’s the main competitor in functionality in my opinion. RIM / Blackberry I just don’t know well enough, and Android / Windows Mobile and manufacturers supporting those are just way too busy badly imitating the iPhone, trying to make their devices look like yet another iPhone without actually being one and more importantly without putting the necessary effort and creativity into the job to actually make their devices good and shiny. I just can’t get why they’re doing this, as Palm made the solution so obvious: Don’t copy everything, just copy the good and important features and copy them well! Then add a few of your own ideas. There must be some?!

UPDATE: I see the need to revise my statement on Android above. I still think what I said is true for Android 1.x and according phones, but it seems this all just changed with the release of Android 2.0 and and a vast number of manufacturers jumping on the Android train. The new software version seems to do exactly what I recommended above. Copy all the good existing features like the iPhone’s app store idea, multi-touch / touch-oriented interface, the Pre’s combined messaging, synergy, hardware keyboard and multi-tasking. Then add some of your own ideas (like a killer navigation app that’s even free) or / and improve on the existing features like combined messaging, better hardware keyboard, etc. Combine this with a developer with nearly unlimited resources (such as, I don’t know, Google?!) and a variety of Hardware manufacturers willing to go along, and you get a system that should be gaining ground immensely fast, casting a huge shadow on the new Palm. More so since Palm is taking it really slow with its update policy and currently not doing much but fix bugs. (This article says a lot of the things I am thinking.) I really hope they have something big to show with the upcoming update(s) because otherwise I see a lot of dark clouds at Palm’s horizon, again!